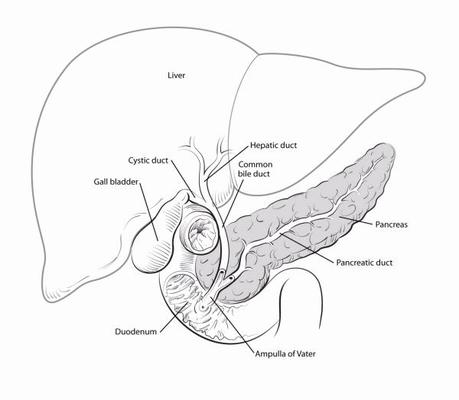 What is pancreatic cancer?

To understand pancreatic cancer, it helps to know about the pancreas and what it does.

The pancreas contains 2 different types of glands: exocrine and endocrine.

The exocrine glands make pancreatic “juice,” which is released into the intestines. This juice contains enzymes that help you digest the food you eat. Without these, some of the food would just pass through your intestines without being absorbed. The enzymes are released into tiny tubes called ducts. These tiny ducts merge to form larger ducts, which empty into the pancreatic duct. The pancreatic duct merges with the common bile duct (the duct that carries bile from the liver), and empties the pancreatic juice into the duodenum (the first part of the small intestine) at the ampulla of Vater. More than 95% of the cells in the pancreas are in the exocrine glands and ducts.

A small percentage of the cells in the pancreas are endocrine cells. These cells are in small clusters called islets (or islets of Langerhans). The islets make important hormones, such as insulin and glucagon, and release them directly into the blood. Insulin reduces the amount of sugar in the blood, while glucagon increases it.

Benign and precancerous growths in the pancreas


Not all growths in the pancreas are cancer. Some growths are simply benign (not cancer), while others might become cancer over time if left untreated (known as precancers). Because people are getting imaging tests such as CT scans more often than in the past (for a number of reasons), these types of pancreatic growths are now being found more often.

Serous cystic neoplasms (SCNs) (also known as serous cystadenomas) are tumors that have sacs (cysts) filled with watery fluid. SCNs are almost always benign, and most don’t need to be treated unless they grow large or cause symptoms.

Mucinous cystic neoplasms (MCNs) (also known as mucinous cystadenomas) are slow-growing tumors that have cysts filled with a jelly-like substance called mucin. These tumors usually start in the body or tail of the pancreas. While they are not cancer, some of them can progress to cancer over time if not treated. Whether these tumors need to be removed or can just be followed closely over time depends on several factors, such as their size, rate of growth, how they look on imaging tests, and if they are causing symptoms.

Intraductal papillary mucinous neoplasms (IPMNs) are benign tumors that grow in the pancreatic ducts. Like MCNs, these tumors make mucin, and they can sometimes become cancer over time if not treated. Some IPMNs can just be followed closely over time, but as with MCNs, some might need to be removed with surgery if they have concerning features.

Pancreatic adenocarcinoma: An adenocarcinoma is a cancer that starts in gland cells. About 95% of cancers of the exocrine pancreas are adenocarcinomas. These cancers usually begin in the ducts of the pancreas. But sometimes they develop from the cells that make the pancreatic enzymes, in which case they are called acinar cell carcinomas.

Solid pseudopapillary neoplasms (SPNs): These are rare, slow-growing tumors that almost always occur in young women. Even though these tumors tend to grow slowly, they can sometimes spread to other parts of the body, so they are best treated with surgery. The outlook for people with these tumors is usually very good.

Ampullary cancers often block the bile duct while they are still small and have not spread far. This blockage causes bile to build up in the body, which leads to yellowing of the skin and eyes (jaundice) and can turn urine dark. Because of this, these cancers are usually found at an earlier stage than most pancreatic cancers, and they usually have a better prognosis (outlook) than typical pancreatic cancers.

Tumors of the endocrine pancreas are uncommon, making up less than 4% of all pancreatic cancers. As a group, they are sometimes known as pancreatic neuroendocrine tumors (NETs) or islet cell tumors.

Pancreatic NETs can be benign or malignant (cancer). Benign and malignant tumors can look alike under a microscope, so it isn’t always clear whether or not a pancreatic NET is cancer. Sometimes the diagnosis only becomes clear when the tumor spreads outside of the pancreas.

There are many types of pancreatic NETs.

Functioning tumors: About half of pancreatic NETs make hormones that are released into the blood and cause symptoms. These are called functioning tumors. Each one is named for the type of hormone-making cell it starts in.

·  Gastrinomas come from cells that make gastrin. About half of gastrinomas are cancers.

·  Insulinomas come from cells that make insulin. Most insulinomas are benign (not cancers).

·  Glucagonomas come from cells that make glucagon. Most glucagonomas are cancers.

·  PPomas come from cells that make pancreatic polypeptide. Most PPomas are cancers.

The most common types of functioning NETs are gastrinomas and insulinomas. The other types occur very rarely.

Carcinoid tumors: These are another type of NET that rarely can start in the pancreas, although they are much more common in other parts of the digestive system. These tumors often make serotonin (also called 5-HT) or its precursor, 5-HTP.

The treatment and outlook for pancreatic NETs depend on the specific tumor type and the stage (extent) of the tumor, but the outlook is generally better than that of pancreatic exocrine cancers.